Over 99% of Gold Leaf in Japan Is Produced in Kanazawa

Gold leaf is widely used for crafts including temples and shrines of high historical value such as Kintaku-ji and Nikko Toshogu.
The reasons why the gold leaf industry, among 36 traditional crafts inherited in the historical city of Kanazawa, prospered are the development of traditional crafts for Noh and tea ceremony under the cultural fosterage program of the feudal clan,
and the uncompromising “artisans’ pride” nurtured in the weather, climate, and land of Hokuriku.

It is not clear when the first gold and silver leaves were produced in Japan. The record says that gold-leafed jewelry can go back all the way to the Tumulus period. Also, the gold has been considered as the symbol of eternity and fixity and used for Buddhism architectures and statues. As the Buddhism culture develops and infiltrates into our country during Heian, Muromachi and Azuchi-momoyama eras, the metal-leaf production technique from China was established as Japan’s unique technique and evolved to what it is today. Although it is not clear when the gold-/silver- lead production started in Kanazawa, the popular belief is that it started when the first lord of Kaga clan, Maeda Toshiie, wrote and ordered to produce gold and silver leaves in his territory of Kaga and Noto to decorate the spears of his troop to receive the Ming delegates by the order of Toyotomi Hideyoshi in 1593 while he was away in the Korean Peninsula. 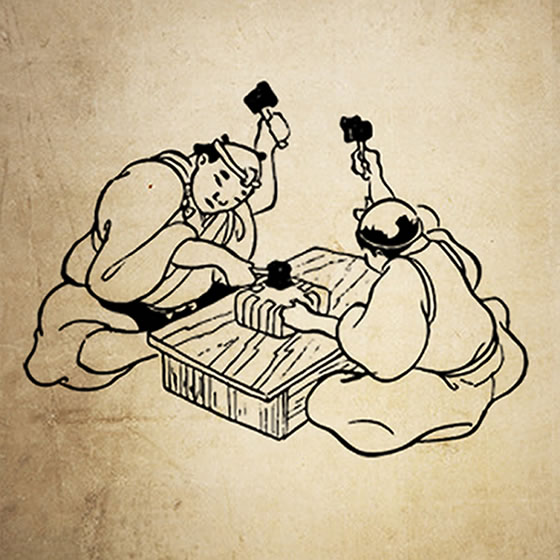 Known as the gold lover, Toyotomi Hideyoshi chose to decorate castle towers and fixture with gold leaf. Many gold-leafed roof tiles including ones with Umehachi-mon crest of the Maeda family, have been unearthed near Jurakudai and Fushimi Castle where the first lord of Kaga clan, Maeda Toshiie, and other feudal lords had their residences. It is assumed that many feudal lords used gold leaf in various places such as roof tiles and interior décor as the symbol of power.
The period of Tokugawa Ieyasu came, and the gold-/silver-leaf production was strictly controlled to solidify the financial base of the national government. It was strictly prohibited by the “Prohibition of Meal Leaf Production” in areas other than Edo (Tokyo) and Kyoto. However, the Kaga clan secretly continued the production in its own craft studios. The clan also invested heavily in the development of traditional crafts such as Kutaniyaki porcelain, Wajimanuri lacquerware, Yamanakanuri lacquerware and Kaga makie, and built the foundation of the craft kingdom Ishikawa is today. 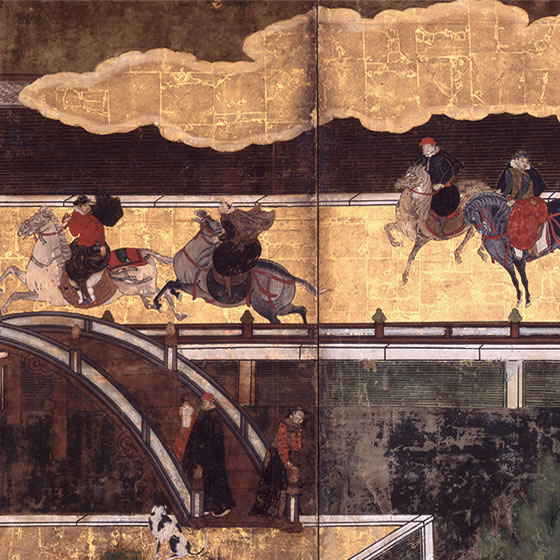 Development of Gold Leaf in Kanazawa

After the Kaga clan obtained the metal-leaf production license for the Tokugawa Shogunate in 1864, the gold leaf of Kanazawa made significant improvement in quantity and quality. With the exclusive metal leaf studios abolished and the Tokugawa Shogunate overthrown in the Meiji Restoration, the Edo Gold Leaf, the fruit of the restriction on the gold leaf production, was lost, and the Kanazawa Gold Leaf has gained the significant prestige.
Germany, the biggest producer of metal leaf in Europe during the pre-WWI period, was devastatingly struck by the war, and it resulted in another significant growth of the metal leaf industry of Kanazawa. Rooted deeply in the religious practices, e.g. family Buddhist altars and their fittings as well as decoration cords, the Kanazawa Gold Leaf has grown to what it is now. 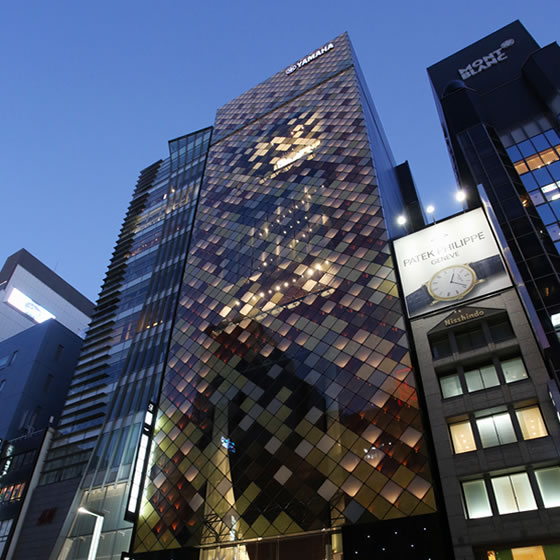 The Kanazawa Gold Leaf used to be just a material, but now it is recognized as what makes the “Kanazawa Gold-leafed Craft”, and established as one of the leading traditional crafts of the craft kingdom of Kanazawa. Gold leaf is used not only for crafts but also for food and cosmetics today. The horizon is further expanded and recently it is demanded more and more as one of the materials to enable the new creation in the architecture and interior décor.
The Kanazawa Gold Leaf indeed is the collective term including not only gold leaf but silver, tin, brass and other metal leaves. It shows the color of the metal itself, but it can also provide the infinite array of creative freedom by subtle change of formulation, addition of special processing and different application to surfaces.
The Kanazawa Gold Leaf will continue to pioneer the new history.